Groups Likely to Give Rise to PBT Properties

A number of literature sources and published data can show which molecular fragments are more likely to cause PBT issues in molecules that reach the environment, and wherever possible these should be avoided. They include both non-functionalised hydrocarbon-like structures and functionalised molecules, and are discussed in more detail in this lesson.

Petroleum hydrocarbons can be divided into four classes: [1]

Scheringer et al.[2] examined ~95,000 compounds for PBT properties with the thresholds defined under REACH. Some data was experimental but most was obtained by modelling (QSAR). Depending on which data set the chemicals were taken from, between 3-5% of the total were classified as potentially PBT. The most common structural motifs noted in the PBT set are listed below Table 1 alongside a comparison with common functionality found in pharmaceutical molecules. 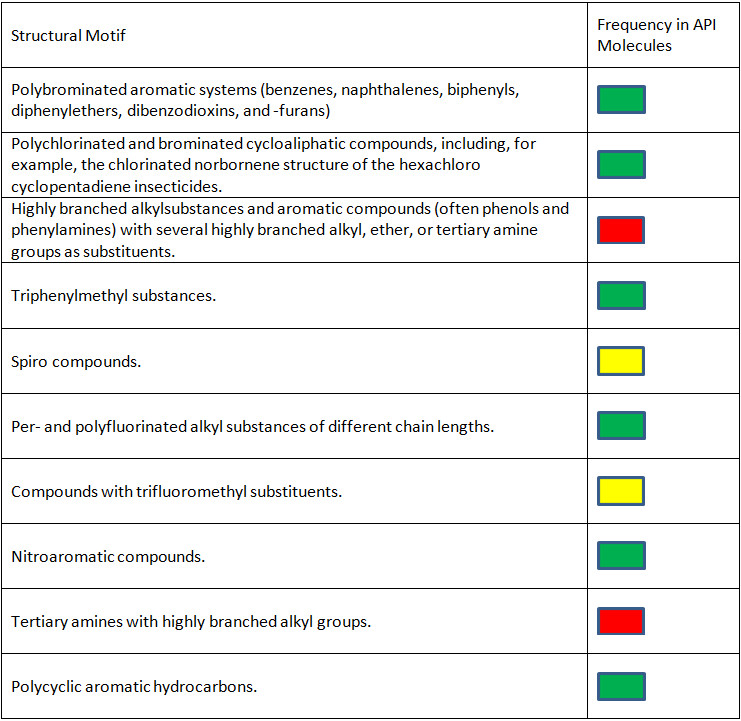 It can be seen from the above analysis that some motifs with high alert for PBT are never or rarely seen in APIs, but some are very common, like aliphatic branched amines and ethers. Generally, if there is a choice, in the case of amines, ethers and alcohols, the biotic degradation will favour: primary > secondary > tertiary, and steric hindrance and branching around heteroatom centres are liable to greatly reduce the rates of breakdown.

Two further areas of commonality are fluorinated compounds and spiro compounds. Looking at the percentage of halogens introduced into aromatic rings during API synthesis* nearly all fluorine and some chlorine are retained in the final API molecule. Traditionally, all bromine and iodine that is introduced is later removed in the synthesis as these elements are only used as a synthetic handles. This picture is beginning to change somewhat, with a few more brominated and iodinated aryl APIs being launched. Generally biotic degradation follows the trend:  I > Br > Cl > F, with organoiodides also being prone to photo-degradation. Fluorinated compounds are very common and fluorine is often chosen for the specific beneficial properties it lends to API molecules and hence is unlikely to disappear from small molecule API portfolios in the near future, if ever. Typically, organofluorine compounds are resistant to biotic breakdown and polyfluorination leads to highly hydrophobic molecules that have a tendency to bioaccumulate. CF3-containing molecules may generate the persistent molecule CF3CO2H if mineralisation occurs.

In addition, whilst spiro compounds are not common in API molecules at present, there is a growing interest in using more spiro fragments and as such spiro compounds may therefore become more prevalent in the future.[3][4]

* This information was provided via a CHEM21 member study of in-house chemistries.